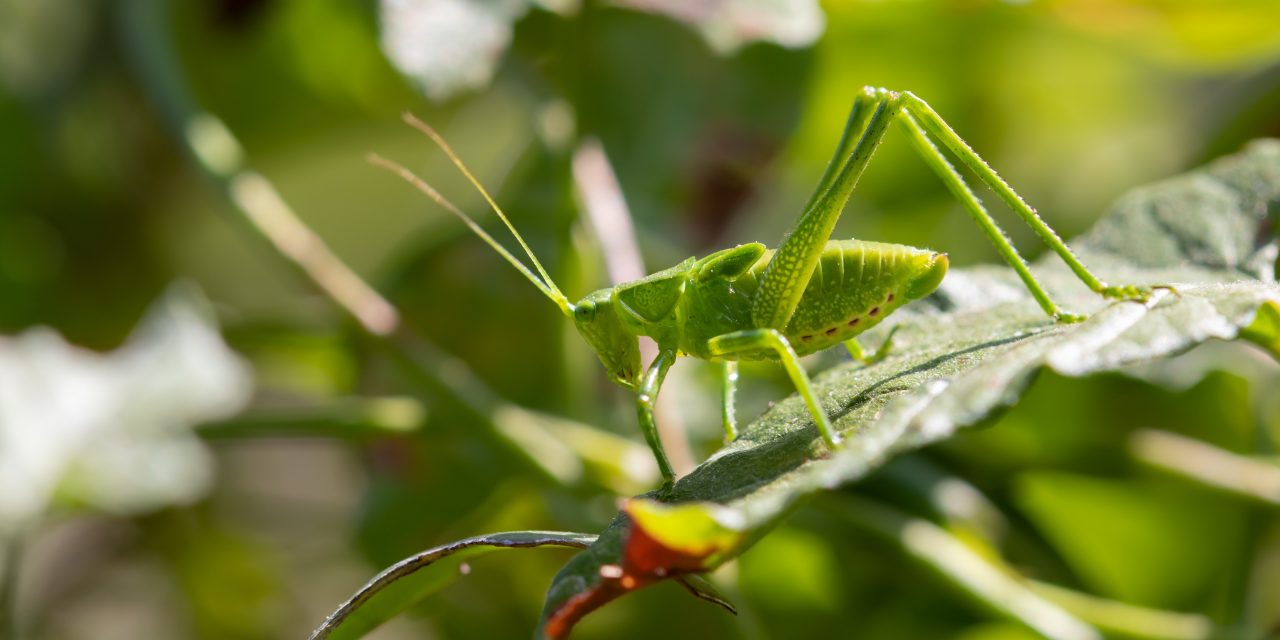 Katydids are insect species that are related to grasshoppers and crickets and they belong to the Tettigoniidae family. In some parts of the world, people refer to them as long-horned grasshoppers or bush crickets. There are over 6,000 species of katydids worldwide. North America has around 255 different species of katydid. The Amazon Rainforest is home to approximately one-third and there is one continent that does not have katydids at all, and that is Antarctica.

Katydids are well-known for being gentle insects; in fact, many people keep them as pets as a result of their docile nature. It has been observed that larger species of katydid will pinch or bite if they feel that they are in danger. This is extremely uncommon, and it is highly unlikely that their bite will cause the skin to break.

Katydids are medium to large-sized insects. The bodies are usually green, and many of them have markings that help them blend in with the many different kinds of leaves and other types of vegetation.

The body of a katydid is usually taller than it is wide. The hind legs are longer than the front or middle legs because they are used for jumping. They have chewing mouthparts and long, thin antennae that extend back to the insect’s abdomen.

Female katydids are typically larger than males, and they have a structure on their bodies that is called an ovipositor. Despite its appearance, the ovipositor is not a stinger and is used to bury its eggs in the ground or insert them into the stems of plants.

They got their name from the fact that they can produce a loud noise by rubbing the front wings together. They have flat spots on their legs that function as ears and pick up these sounds. Some katydid species can fly.

The metamorphosis of katydids is only partially completed when it emerges. The nymph that hatches from the egg has a very similar appearance to an adult, with the exception that it does not have wings. Katydids are known for shedding their exoskeletons as they mature. This is called “moulting.” During their final stage of metamorphosis, they develop wings and transition into adulthood. At that point, they are finished maturing and will no longer shed their skin.

How long do katydids live?

The vast majority of katydid species have a lifespan of about one year. However, studies have shown that certain species in tropical environments have a much longer than average lifespan. The reason for this is that katydids can only survive the winter months in the egg stage of the lifecycle.

There is no evidence to suggest that katydids are dangerous to people or other animals, including pets or birds. So having them in the garden or keeping them as pets will not cause any harm.

What do katydids eat?

Katydids are omnivores, meaning that they feed on both insects and leafy plants. Some species of katydid, particularly those that are adapted to living in tropical climates, obtain a much larger proportion of their nutrition by eating other insects. The vast majority of the katydid species found in your garden will primarily feed on aphids, leaves, and stems.

Are katydids considered a pest?

Katydids are considered to be a pest as they like to eat grass and leaves, They will be drawn to your garden if you have plants that they enjoy eating. Some katydid species are carnivores that will eat smaller insects, so having them around can help to keep other garden pests under control.

Can you keep a katydid as a pet?

Yes, you can keep a katydid as a pet. They will require a similar set-up to leaf insects. Like leaf insects, katydids do make great pets for kids especially as a first pet to give them some responsibility. Katydids dont have a long lifespan if your child does become bored or loses interest in it.

katydids are mostly nocturnal insects, so the best time to look for them is at night when they will be drawn to the glow of artificial light.