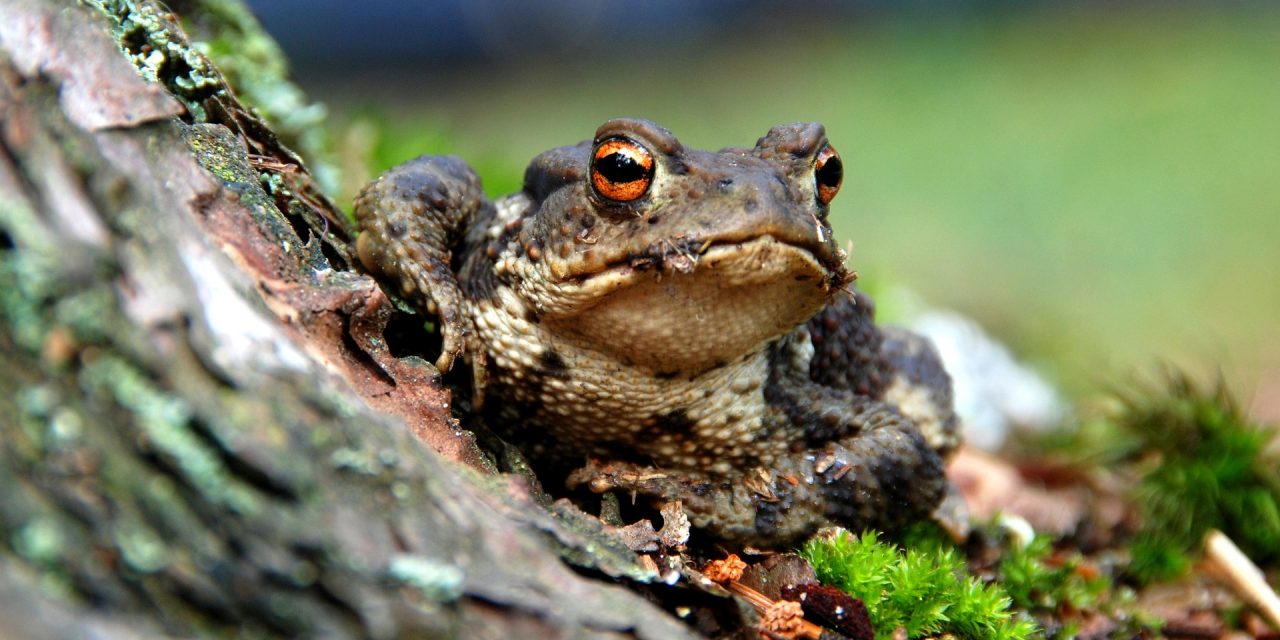 The common toad is a species of amphibian. They spend the breeding season in ponds and the rest of the year foraging in grassland, woodland, gardens, and hedgerows. During the winter, they go into hibernation and can often be found hiding under log piles, stones, or even old flower pots.

The number of UK toads has declined dramatically over the last 30 years, dropping by a whopping 68%, which puts them at risk of extinction. The decrease in numbers is mostly due to the fact that toads migrate during the breeding season. Toads are very picky about where they breed, and they often go back to the same ponds year after year.

When returning to the ponds, toads will always take the same route back, which may require them to cross busy roads. It’s estimated that 20 tonnes of toads are killed on the UK’s roads every year, so it is essential that they have some help during the migration period.

What is a toad crossing?

The term “toad crossing” refers to a location where it has been documented that more than one thousand toads cross a roadway at the same time. Toad crossings are staffed by volunteers for a few nights during the spring each year. The volunteers use buckets to catch any frogs, toads, or newts that are trying to cross the road, and then they transport them safely to the other side of the road.

Winscombe, in North Somerset, has the highest number of toads in the Mendip Hills. Every year, from the beginning of February until the end of March, hundreds of toads can be seen travelling across Winscombe Hill and Church Road on their way to breeding ponds. They are assisted by a volunteer toad patrol. Despite this, there are still hundreds of toads that are killed annually.

Residents have started a petition to close Winscombe Hill and Church Road for a short time during the toads’ migration season to help more of them get to the breeding ponds. If the proposal is accepted, the road will be closed during the hours of darkness, which is when there is a higher probability that toads will be on the move.

Residents, emergency vehicles, and service vehicles will still be able to access the roadway. However, all other vehicles are encouraged to take alternative routes. Chalcombe and Bath both have patrols like this, which has cut the number of toad deaths by 75%. Toad crossing diversions will have very little impact on drivers, but they will have a significant impact on the protection of toads and other local wildlife. Sign the petition here.

Are toads good for the ecosystem?

Yes, all amphibians, including toads, frogs, and newts, are good for the ecosystem. They are extremely helpful for pest control because they eat slugs, snails, beetles, and flies that can destroy crops and plants. Using natural pest control like toads not only keeps your garden pest-free; it also helps cut down on pesticides and herbicides, which can be toxic to beneficial insects like bees and butterflies.

What is the difference between a toad and a frog?

Frogs prefer damp environments and have smooth, moist skin and long, striped legs. The common toad has warty olive-brown skin and short back legs and can live in drier environments. Toads crawl and frogs hop, and when threatened, a toad can puff itself up to appear larger. Frogs lay their spawn in a clump, and toads lay a long string of spawn.

What do toads eat?

Slugs, snails, and other types of invertebrates make up most of the common toad’s diet. However, it has been documented that larger toads will consume small slow worms, grass snakes, and even mice.

What is the average lifespan of a toad?

This would depend on the species. However, the average lifespan of a toad ranges from 10 to 15 years. Toads kept in captivity, on the other hand, have been documented as living for up to 50 years.

Can you keep a common toad as a pet?

In the UK, it is against the law to buy or sell common frogs, common toads, palmate newts, or smooth newts. You should not take any animals from the wild with the intention of keeping them as pets. However, common frogs, common toads, palmate newts, and smooth newts are allowed to be kept in captivity. Once they are in captivity, all amphibians will be protected under the Animal Welfare Act of 2006.

Under the Wildlife and Countryside Act of 1981, all native amphibians in the UK are given some kind of legal protection. Protected species like the great crested newt, natterjack toad, and pool frog can’t be captured or harmed in any way. It is also illegal to damage or destroy the habitats in which these species live.

How can I contribute to the growth of the toad population?

Toads will start their annual migration to breeding ponds sometime between February and March. Because of this, it is likely that they will cross busy roads along the way. As a direct consequence of this, a considerable number of toads are run over and killed by moving vehicles.

These roadways are also referred to as toad crossings. During this time, the volunteers will spend a few days watching over the toad crossings and assisting the toads as they make their way across the busy roads. Find a toad patrol near you.

How can I attract toads to my garden?

The best and most effective way of attracting toads to your garden is by constructing a pond where frogs can lay their eggs and tadpoles can thrive.

Never put fish into a pond that you want to attract amphibians to, as they will eat spawn, tadpoles, and other life forms in the pond.

What else can you do to attract toads to your garden?

You can attract more toads to your garden by:

All of these elements will come together to create the ideal environment for toads and other amphibians to live in.